Adore the Immortals, for they are Ours! 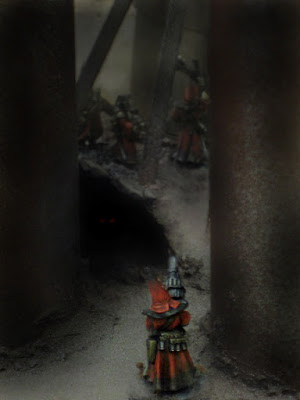 "Aye lads, gather 'round. Stay here and listen to the nightmares of the Sump Sea. This sad tale begins on the edge of the Great Sump, near a huge drainage tunnel that just happens to be the most direct route from the Underhive to what lies beyond the Wall. The twin settlements of Sumptown and Port Imperiale sprang up on either side of the tunnel, growing wealthy on the trade between the hivers and Ash Nomads, Sludge Sea sailors, and even smugglers from the spaceports outside the hive. The shops and bazaars were stocked with exotic items unavailable anywhere else. The taverns were teaming with wanted men, desperadoes, and strange offworlders. Port Imperiale was a shining boomtown of vice and false promises, while Sumptown was a lawless sprawl of shanties and thieves dens. Mayor Norton I of Port Imperiale, though a mere figurehead, was much beloved by the citizens and visitors. A sort of peace and order was maintained through a truce between the three largest gangs, the Orphans, the Savages, and the Spuggs.
This fragile peace was shattered by a series of bombings and assassinations which decimated the three gangs and left the cities and surrounding settlements dark and smouldering. The Immortals, a large gang from a distant part of the hive have moved in to fill this power vacuum and attempt to restore order.
So, what will it be lads? Try to rebuild Port Imperiale to it's lost glory, join up with the foreign upstarts, or sit here drowning your sorrows in another tankard of fungale?

At the game day on the 1st, I have a list of 5 scenarios written up for us to play, some can be replayed several times, a record of the results will be kept that will determine the disposition of forces for the big game at KublaCon, which will be a Siege scenario from the Outlanders book, representing the Immortals final assault on the defenders of Port Imperiale.

Should the player choose to side with the independent gangs and the mayor, the following rules apply:
1. Dispossessed civilians are eager to help. The gang may hire Scummers for 5 credits, or 1 independent ganger or d3 Scavvies for free.
2. Refugees looking for a new start are plentiful. The gang may hire new Juves for 15 credits.
3. If the Mayor and the Independent gangs maintain control of Port Imperiale, the gang will receive D3 randomly determined new territories.

In the comments below, please post before Saturday morning which side you are backing. First come first serve, but if you guys bunch up on one side, I may have to either sweeten the other deal, or bump some of you over to the opposition. Now back to the painting table for me.
Thanks, good luck, remember if the bad guys are "the Boot" and the good guys are "the Neck," it's better to be the bad guy, and always check those corners.