Recently Skywatcher, myself and some of the other lads have been playing the classic Call of Cthulhu RPG. Doing it old school, with pen, paper, chips and soda. Just like Sandy Petersen intended.
Being a miniatures gamer, I can't help wanting to bring pewter to the table. I've had several of the ancient RAFM minis, most have been sitting, unassembled and unpainted in my bits box for years, dare I say decades.. Some, like the one piece Moonbeast, are fantastic and a joy to build and paint. Others, not only require a good deal of assembly, but the molds are so old and worn that the effort to put them together is a bit daunting.
What follows is my record of repairing, building, and detailing a Dark Young: 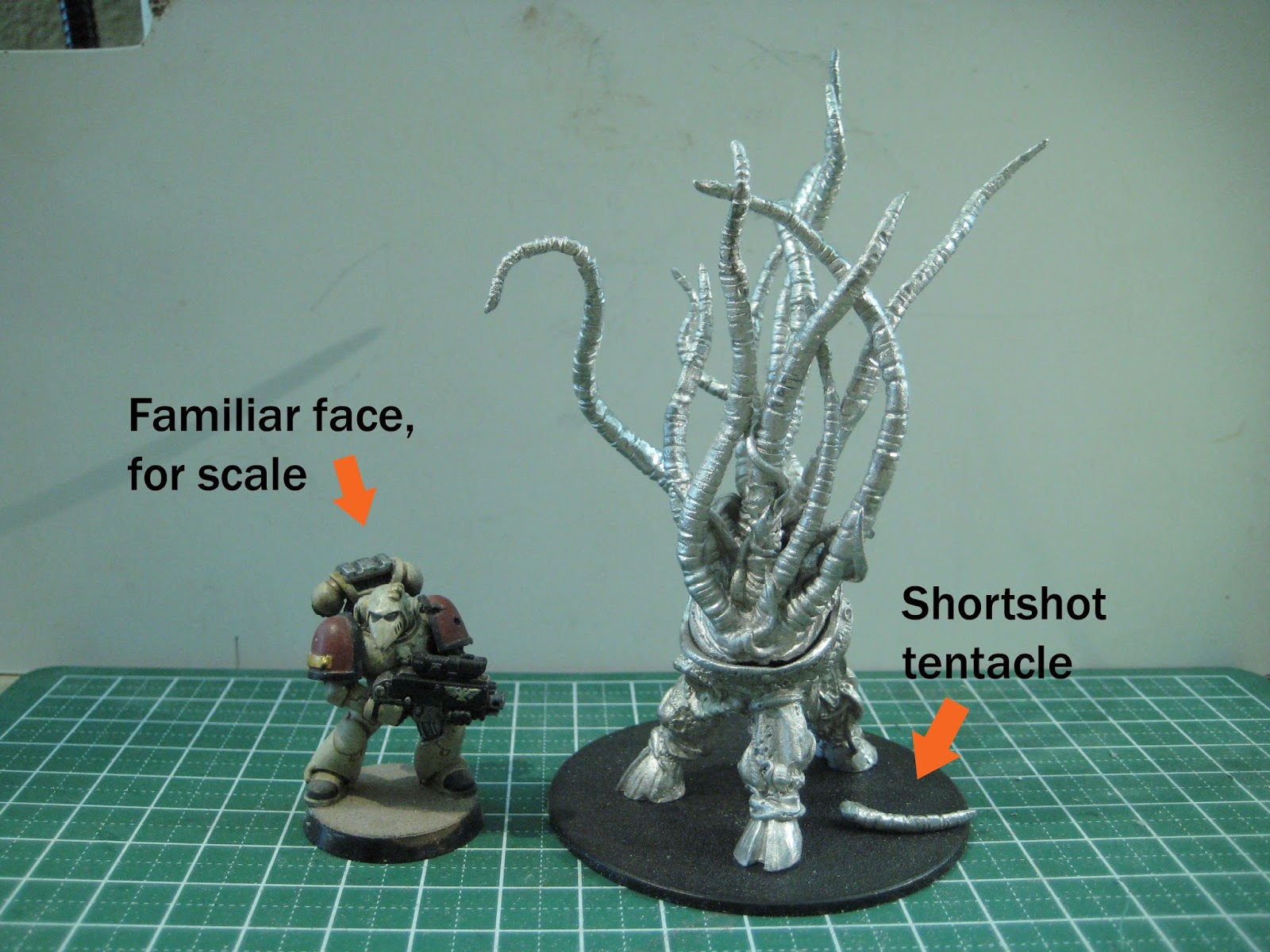 There were many problems, shortshots, voids, gaps, ill fitting joints, etc. Even when you consider that its an old cast of an old mold of an old sculpt, its still in bad shape. This is the first assembly, after cleaning mold lines with files, clearing flash with a blade, and gluing with CA. Luckily all the joints were large enough that pinning wasn't required. 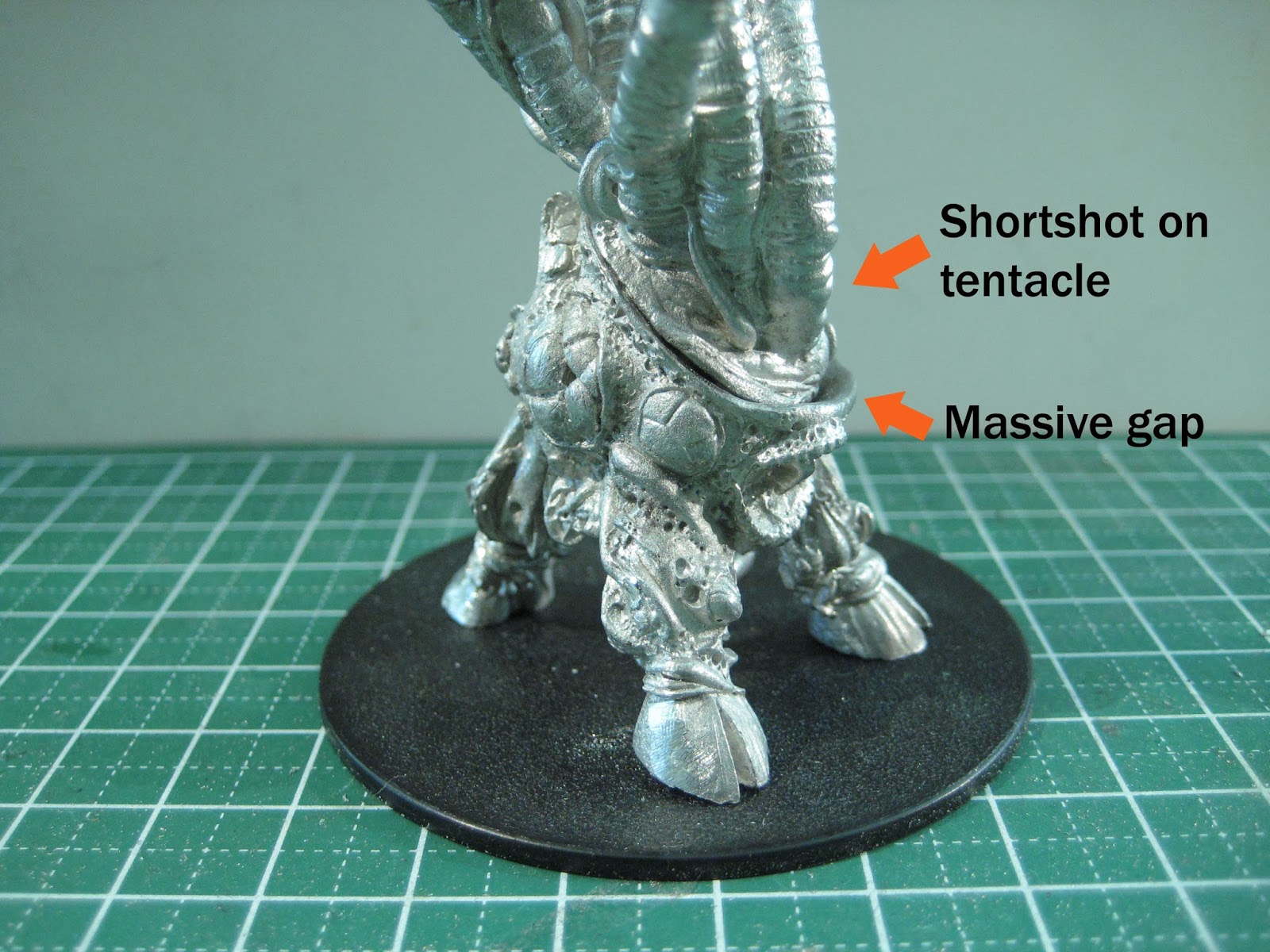 Here you can see the main problem, the joint between the lower body and the main tentacle section was either miscast or the molds have warped over the years. 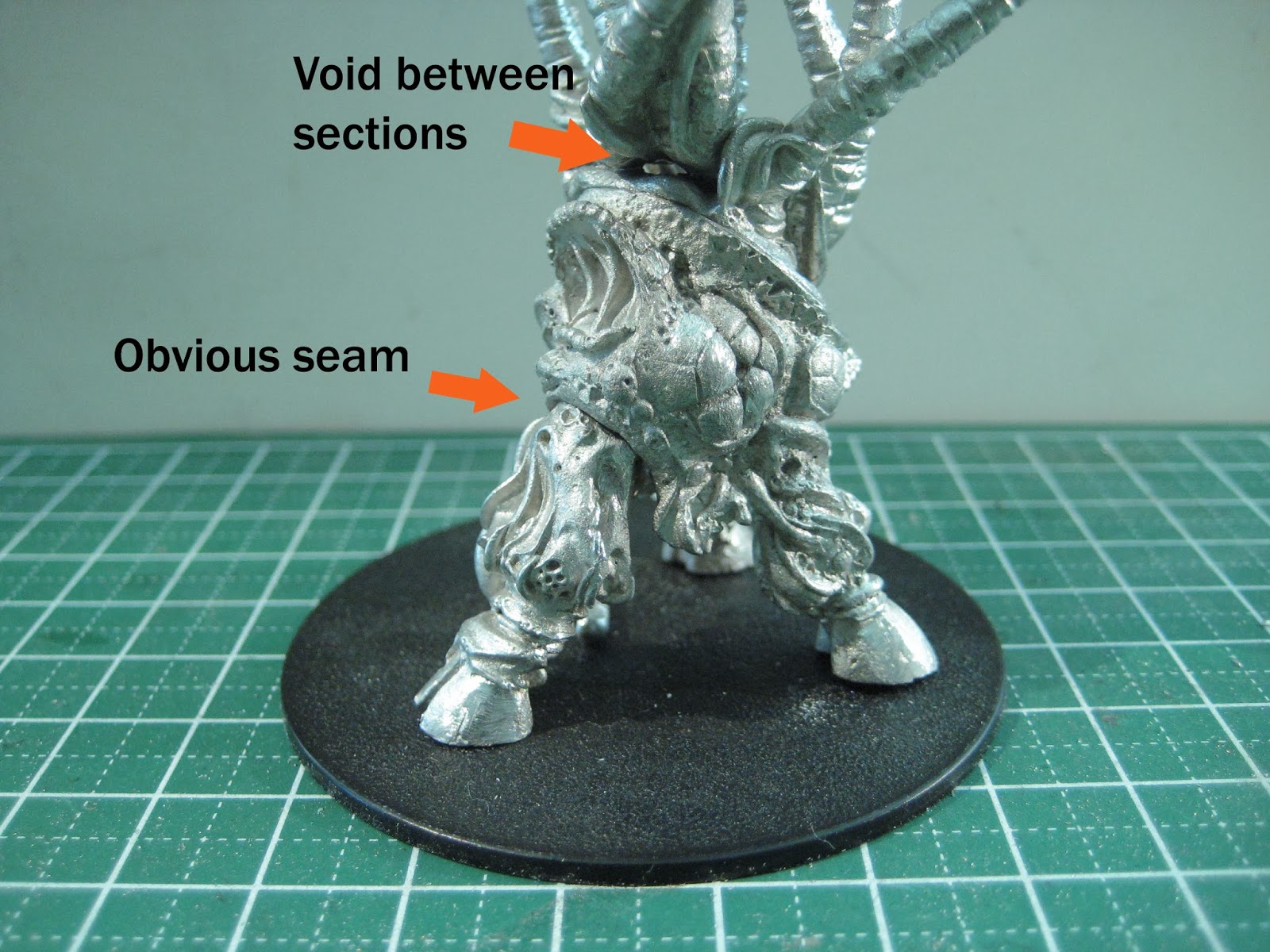 The joint between the two sections of tentacles also had large spaces. The socket for the third leg was acceptable for an older model, but since I planned on making everything seamless, it was on the list. 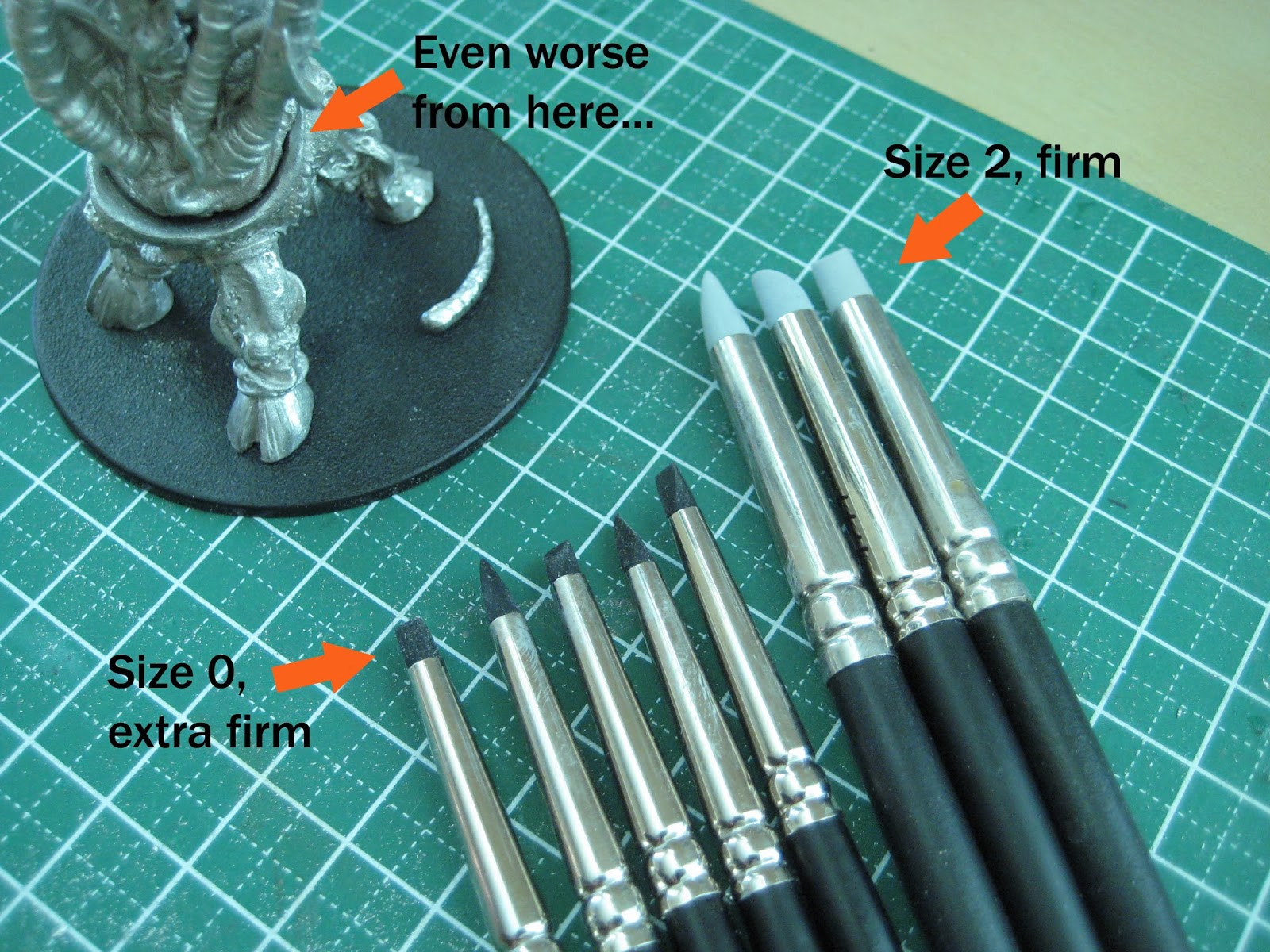 While I'm on the subject, I thought I would share some of the tools and tips I use. The above are Color Shapers, rubber tipped tools for pushing clay and putty around. Learned about them in a sculpting seminar given by Matt Gubser, A man far too good looking for the miniatures hobby. Color Shapers leave putty with that smooth professional finish that can't be had from most tools. 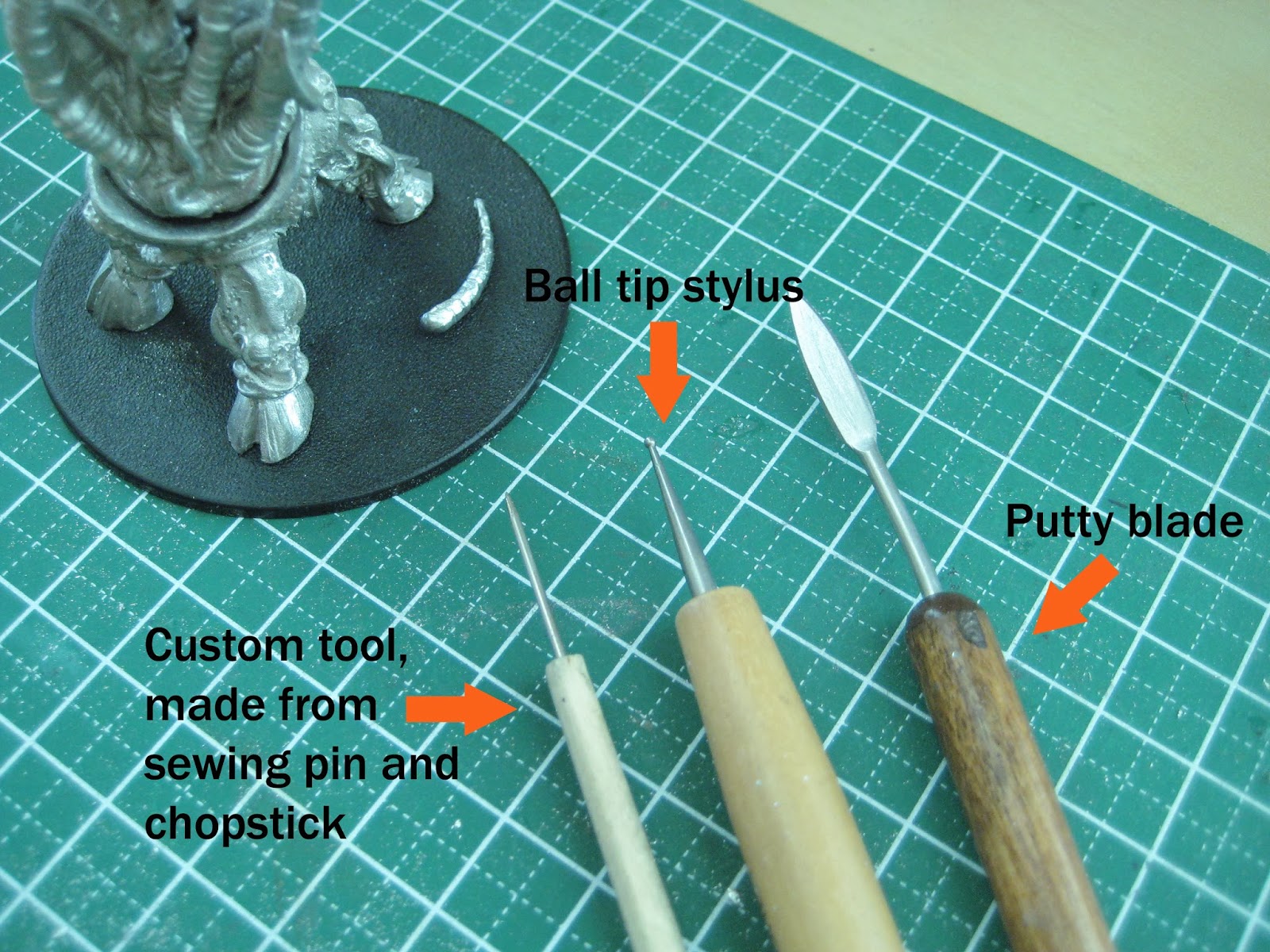 These are some of my other handy tools. A basic putty blade, ball tipped stylus, and a chopstick with a pin in one end and a tiny blade on the other. I made the tiny blade by smashing the end of a paper clip in a pair of pliers then filing an edge. 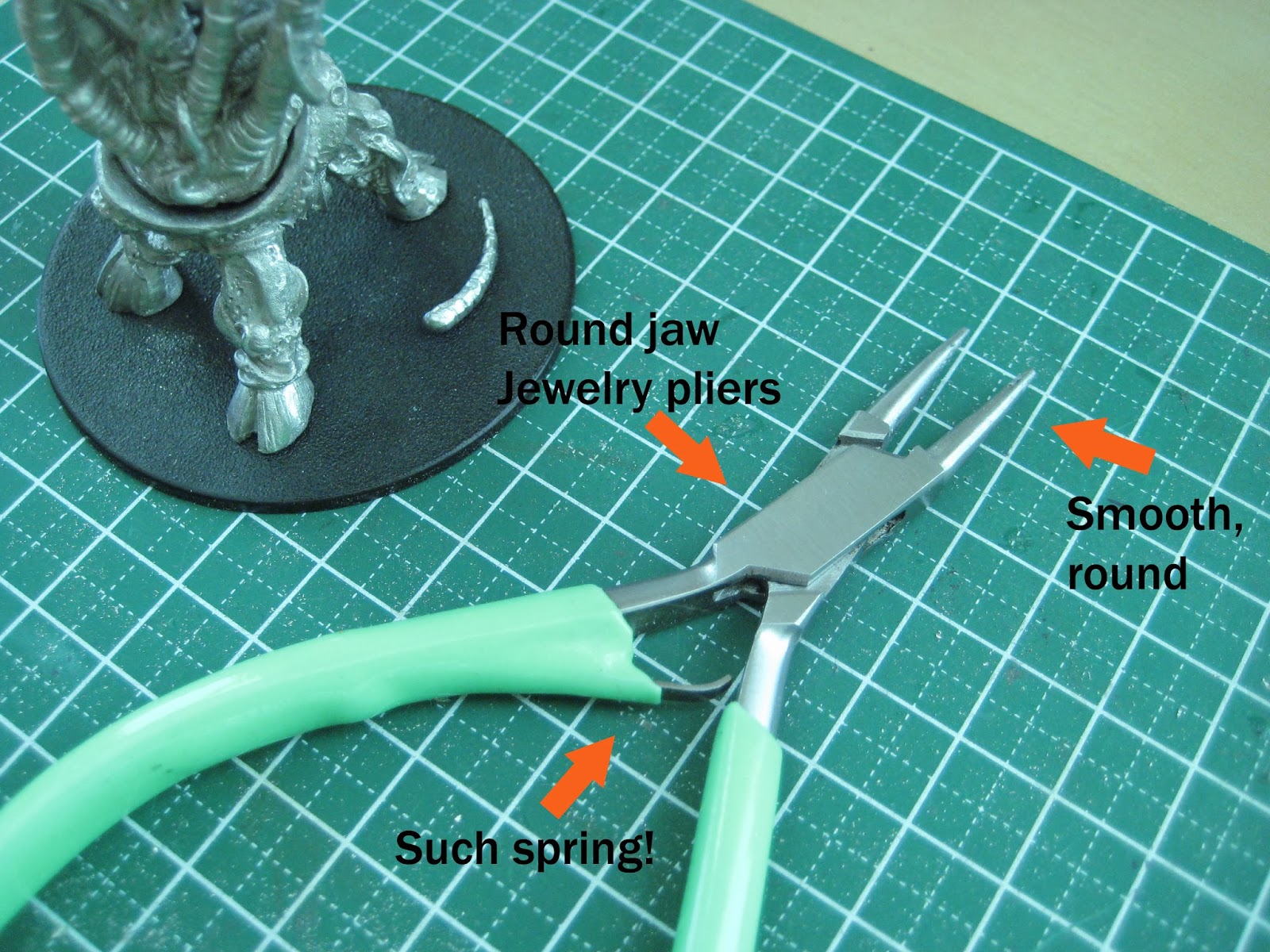 Another important tool, Jewelry Pliers are normally used for making jump rings. I use them to bend arms, legs, tentacles without damaging the miniature. The smooth jaws don't leave tool marks and you can use them like a pipe bender to make wider curves. I used them to bend the Dark Young's tentacles into a more gribbly, grabbly chaos. 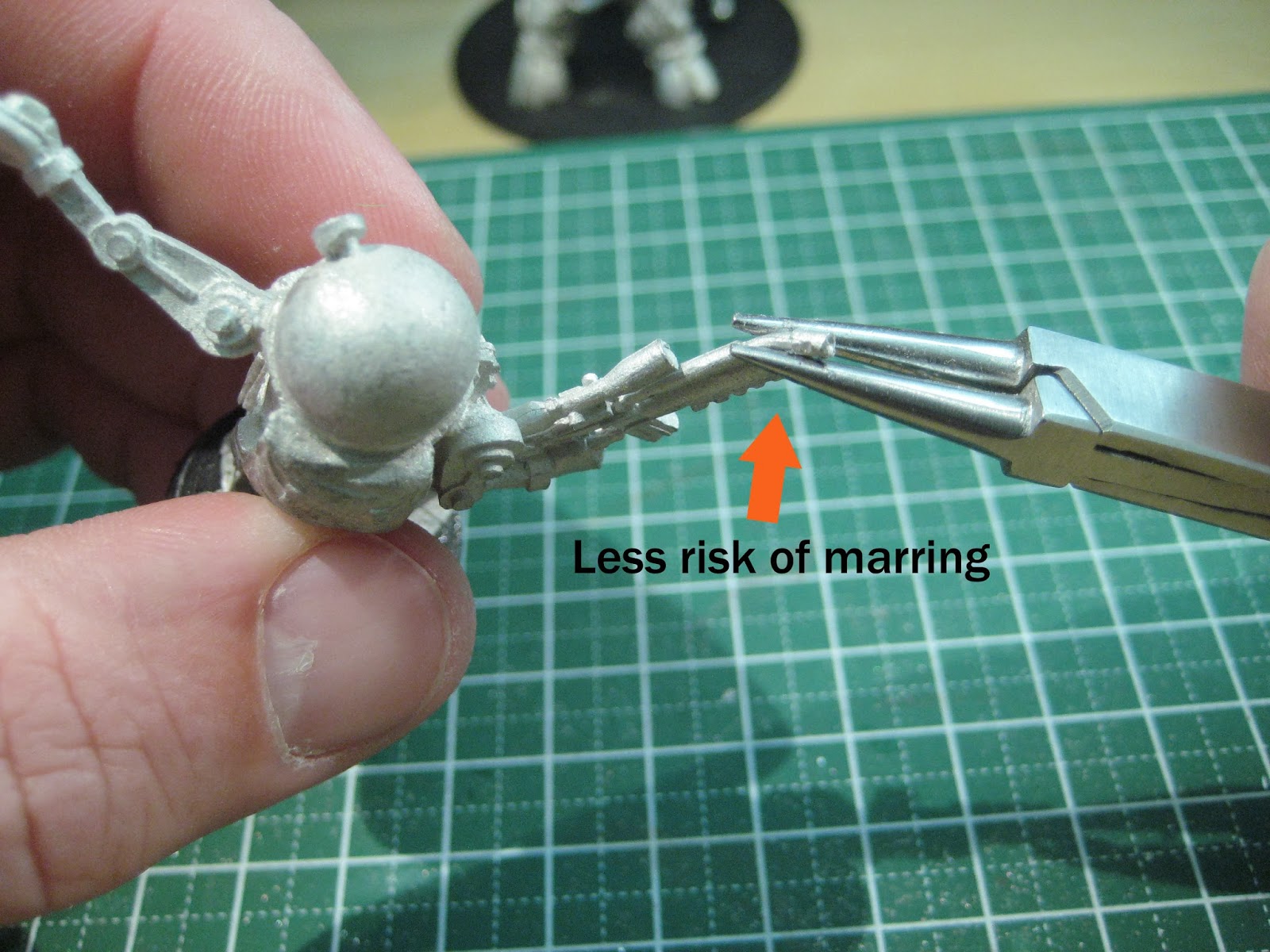 An example of repairing a damaged mini. 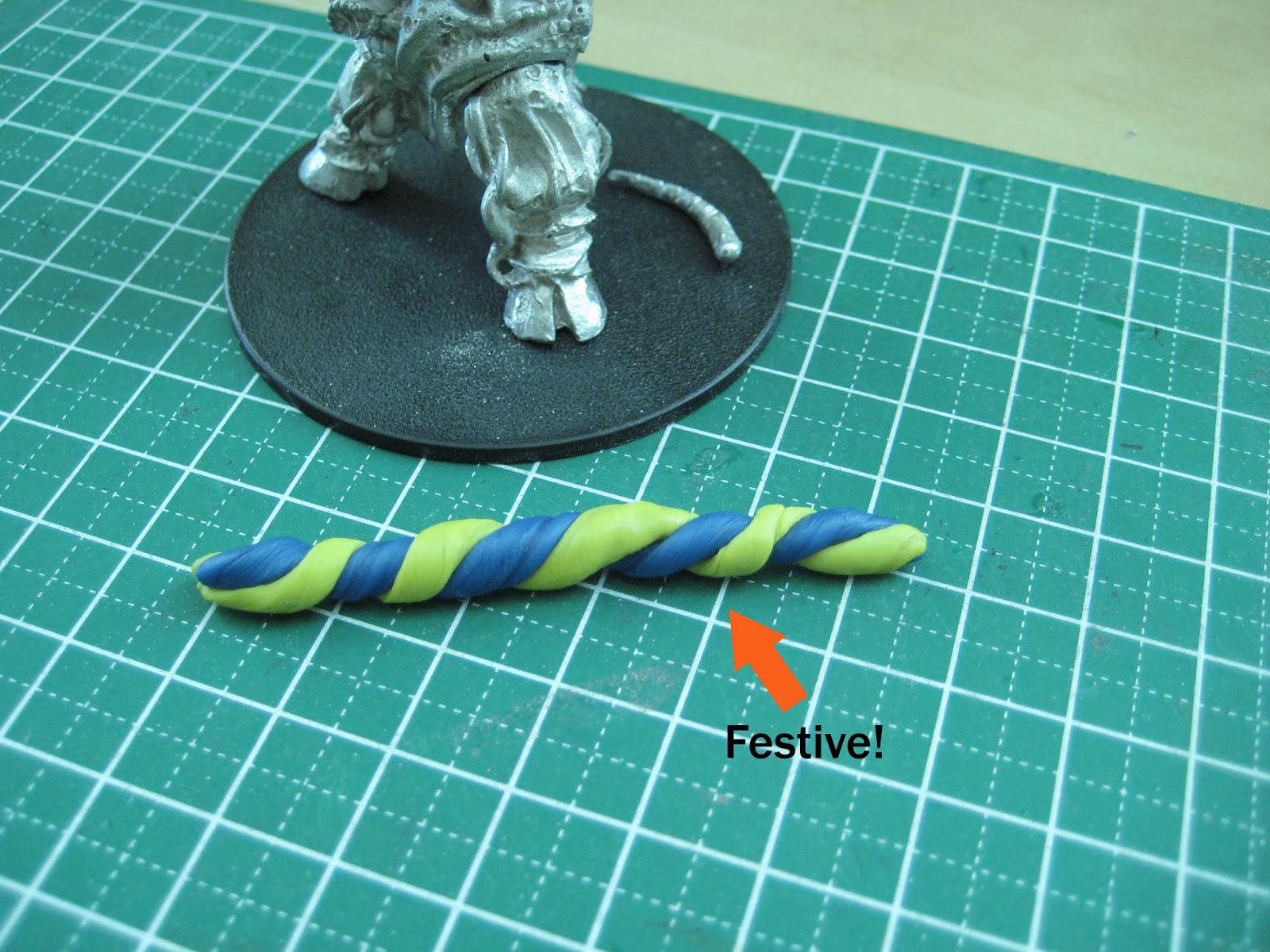 Another tip from Matt Gubser, when mixing epoxy putty, you can ensure the two parts are evenly mixed by twisting them together. 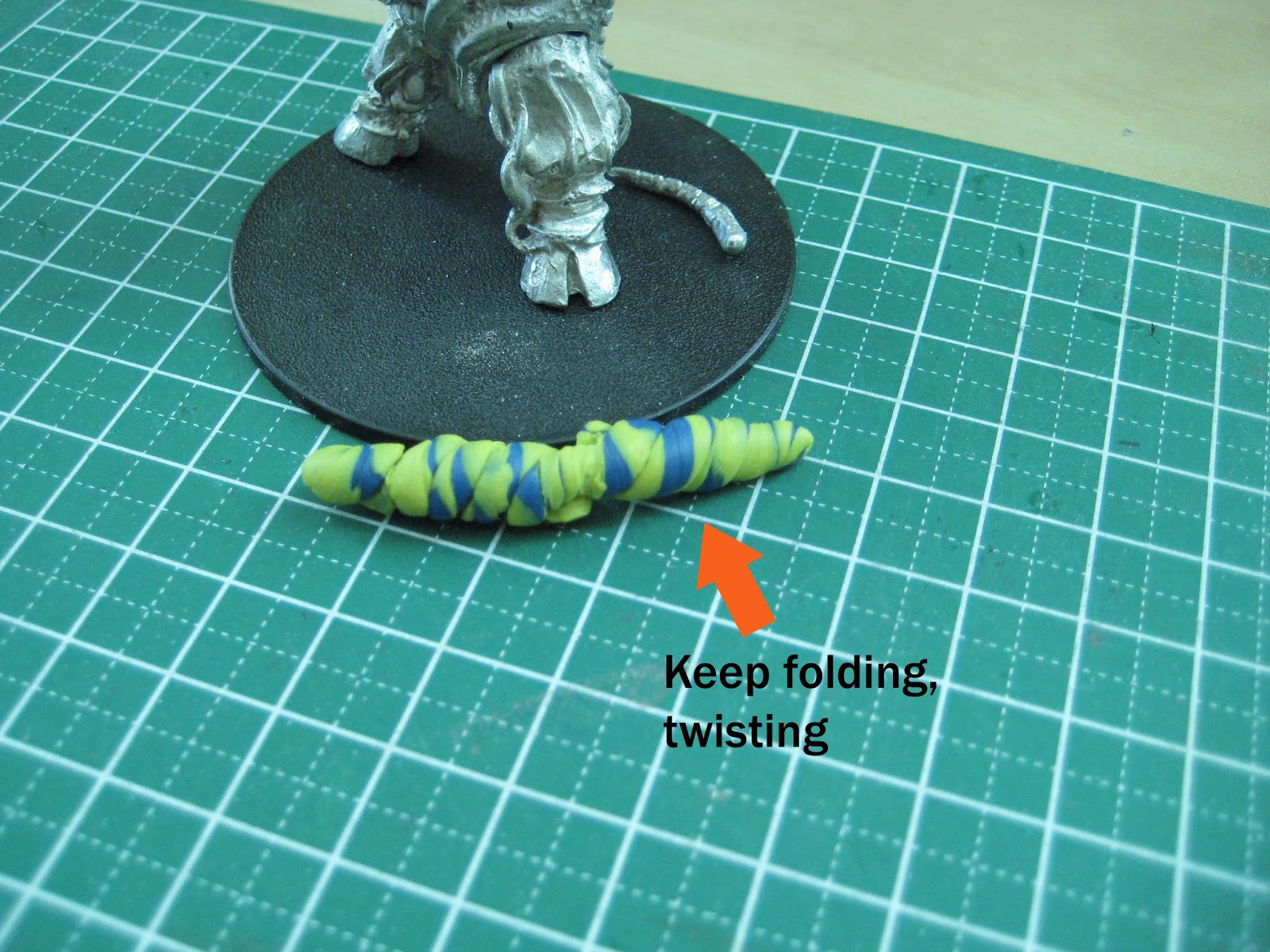 Twisting makes the "sausage" longer, so just fold it in half and keep twisting. 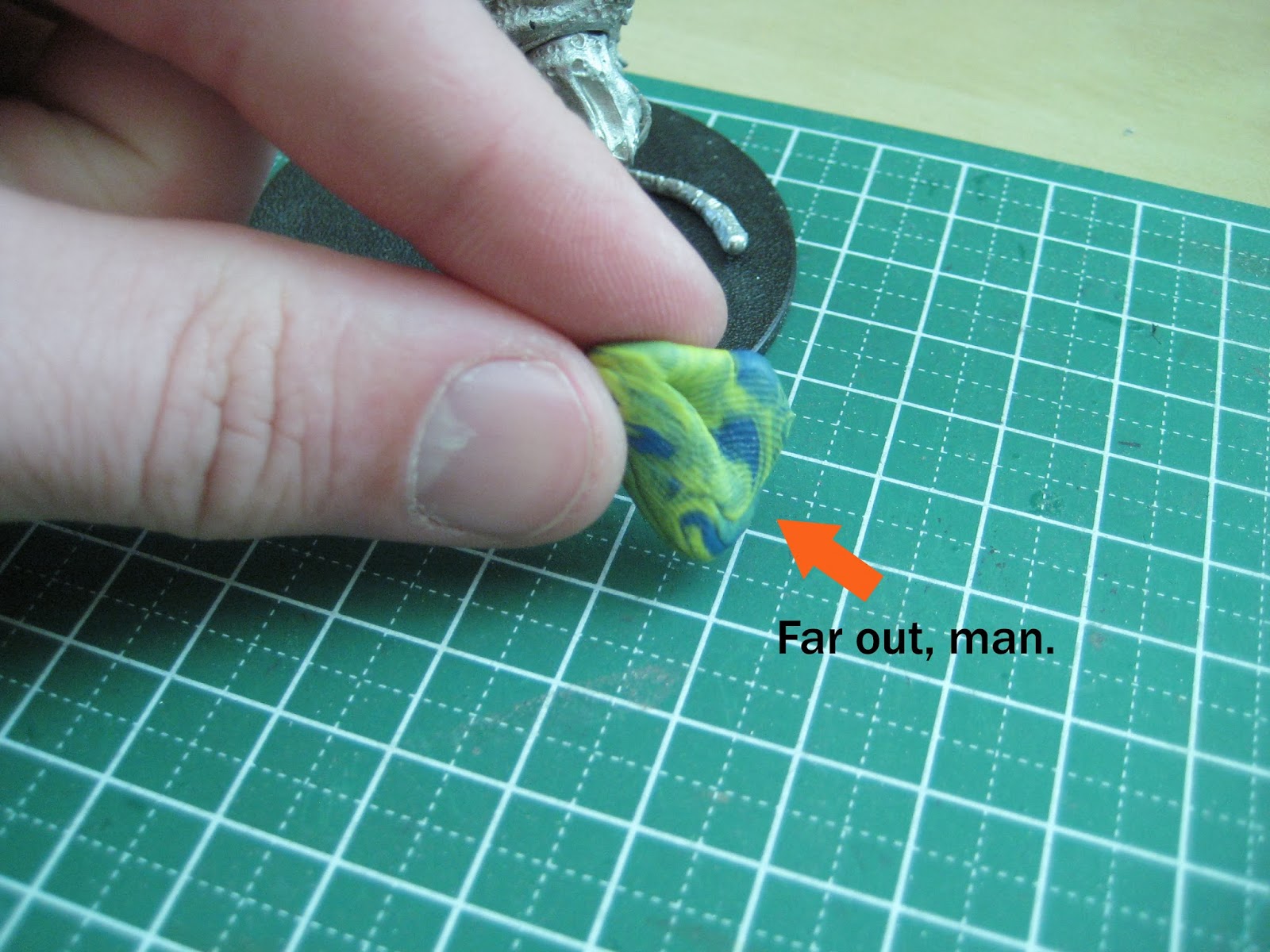 Once you've twisted and folded a few times, then you can smash it together and knead the swirly, psychedelic glob until its a uniform, verdant green. 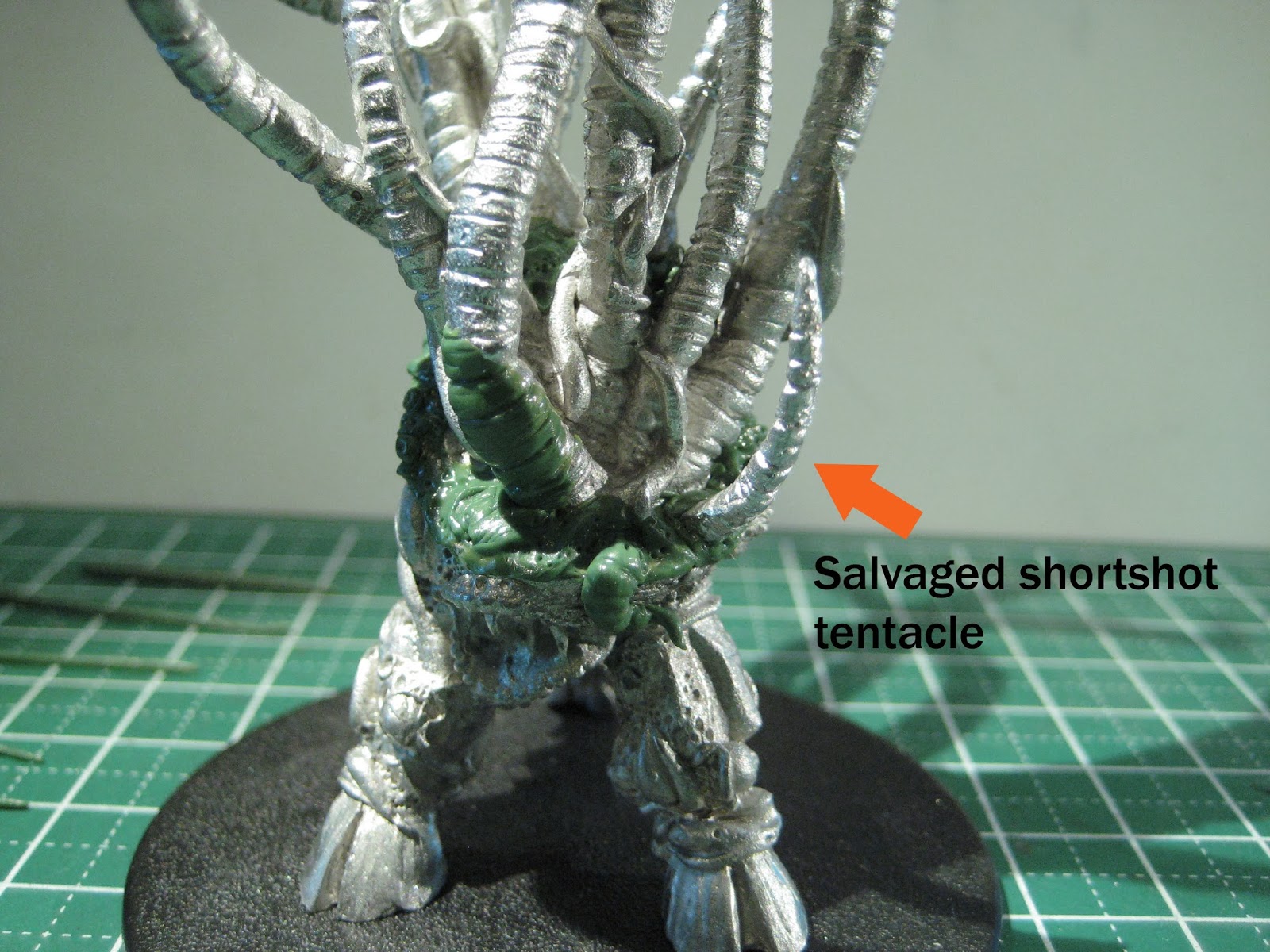 I didn't bother taking mid-sculpt pics, because the other-worldly anatomy of the Dark Young lends itself to free-form design. 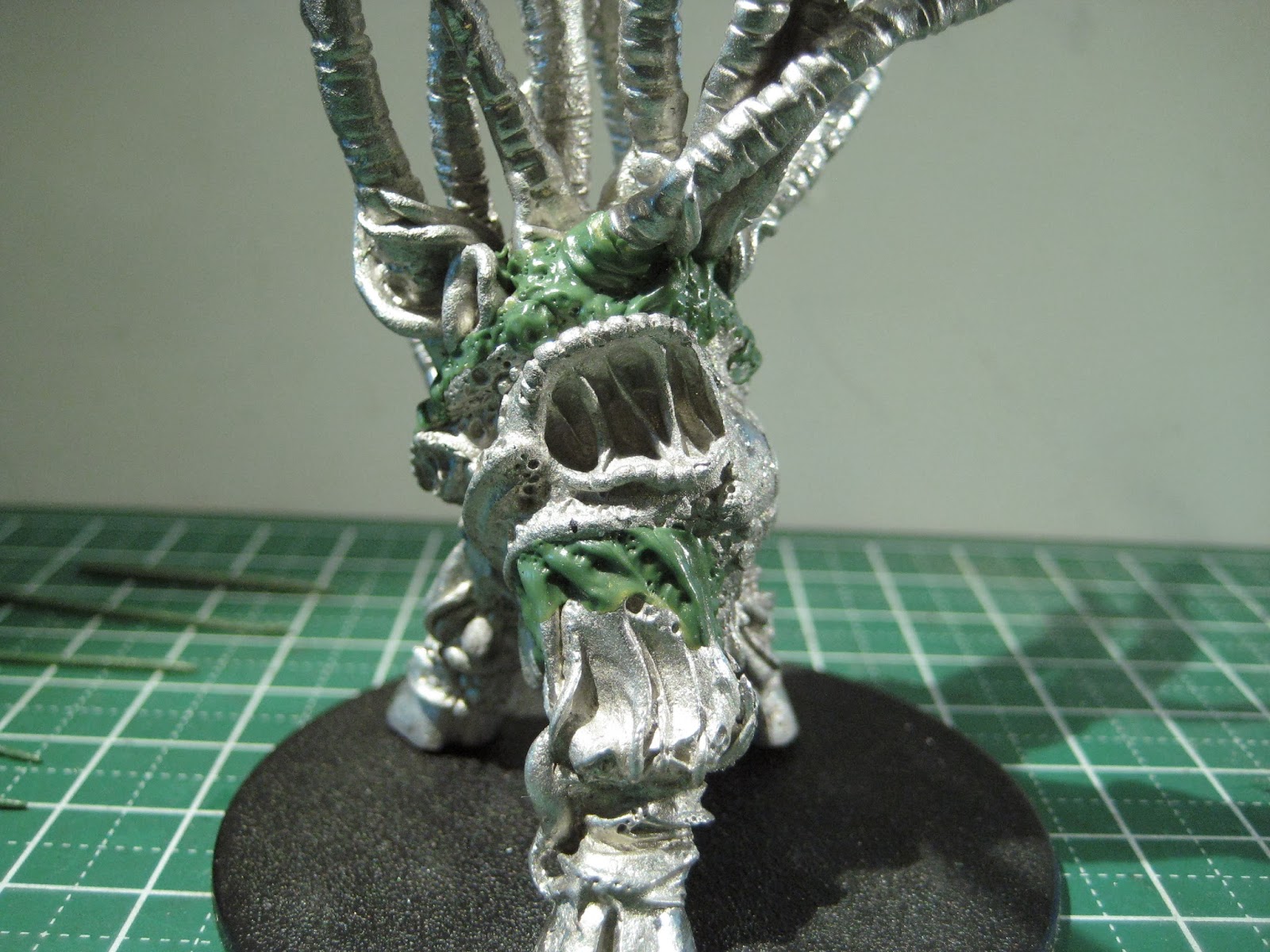 This pic shows the swoops you can get from the Color Shapers, the wrinkles from the putty blades, and the pock marks from the stylus and pin.
Part 2 will be basing tips and techniques, followed by priming and painting.
Posted by Op-For at 7:42 PM

I would be excited to see this fella. But knowing now that this means there is a good chance our feeble group of investigators may face such an enemy... I'm not so sure.

Sympathy for filling all those dark (young's) gaps.
I got RAFM Cthulhu model recently and even though sculpt is characterful it requires a ton of greenstuff to make model fully operational.