To Brand or not to Brand... 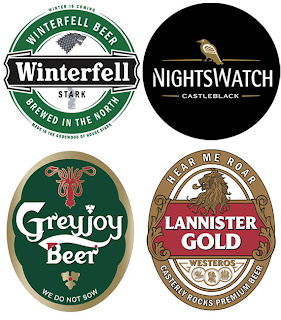 So I had an idea. That's the cue for those who know me to run away screaming. I thought of a concept for a cross genre game to run at KublaCon next year. One that would bring the various groups of gamers together and sow harmony between the Miniatures Wargamers, Pen and Paper Roleplayers, Card Gamers, and LARPers. Then, over the course of the weekend, tear them apart with backstabbing and treachery. It would sort of be a cross between a LARP, those Button Wars (or Button Men?) games and a Games Workshop Global Campaign. Players would be free to participate as much or as little as they choose and the game would have minimal interference with playing in other games. It would be loosely based on a currently popular fiction series.
So, here is my question: Should I go ahead and just use the Names and Locations from the series in the game? Mind you, its loosely based, the outcome will be unscripted, and players will be free to make any alliances they choose to make. However, if "Branded" the game will for better or worse, have the added emotional impact of pre-existing characters and concepts, as well as be much easier for me to write.
Would you be more willing, or less willing to play in a game with a familiar "Brand?"
Posted by Op-For at 4:19 PM

As long as I get to pick my brand of beer.

You haven't scared me off. Yet. ;) It depends on many factors but branding with a well-loved brand will probably get many to sign up who may not have otherwise. Probably a lot to gain and not much to lose by branding. Personally I'm going to feel an itch to get in character and use that emotional baggage from the show but but it depends on what kind of tone and how casual the game.

Branding for sure. By going this way you can draw on the background and emotional attachements that have already been built up and don't have to explain as much.