But I'm the Dragonborn... 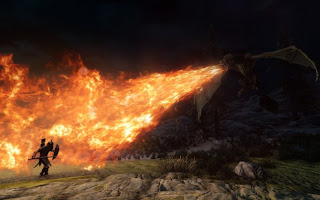 This is too nerdy for Facebook, but I thought you guys might find it funny. I spent 45 levels "Sandboxing" in Skyrim, mostly buffing out my Smithing and Enchanting skills, and killing bandits and taking their stuff. Moral questions about stealing from stealers aside, I just started getting into some of the campaign quests. The ones intended for lower levels are now quite funny, as the characters question your prowess, and equipment. They gave me a steel sword that does 70 damage, to replace "whatever that is." "THAT" is a dragon bone sword that does 206... oh, and it siphons health and fills soulgems. They challenge me to a fist fight after I just saved their village from an Elder Dragon. Calling me names and trying to intimidate as we are literally fighting amongst the bones of a dragon I killed before their eyes.
I wouldn't deign to give Spooktalker tips on using inks as I'm helping him carry his painting contest trophies out to the car, nor would I, with my bum knee and vans try to go long distance running with Skywatcher (during a Con mind you, the guy is kind of a badass). I do sometimes try to match wits with DoomsDay, but only to keep my Daedric Sarcasm (Epic) sharp.
Pretty stinkin' nerdy.
Posted by Op-For at 1:34 PM 3 comments: