A few weeks back Spooktalker, celebrating my arrival on your planet, gave me a set of Grindhouse Games Dogface Combots from their tennative JUNK line of miniatures. The Dogfaces are currently out of production, but Spooktalker was able to get his hands on a previously owned set. The previous owner had severely neglected the poor 'bots. Shoddy assembly, lack of clean up, sub-standard primer, and improper handling had left them in a sad state. 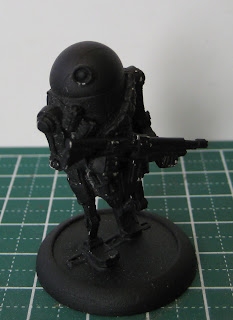 So with a 2 week soak in Simple Green and a little tlc, they are starting to look like the crack team of metal militants they were made to be. 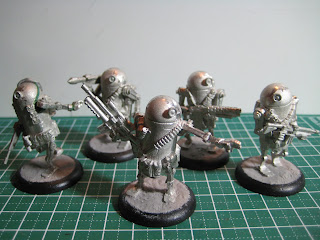 I made a few minor alterations to establish some character, for instance the CQB Combot with his auto-shotgun would be in the thick of the fighting and ought to have a few more scrapes, dents and blown circuits than the basic model. So I used round and leaf-blade needle files to add some realistic battle damage. 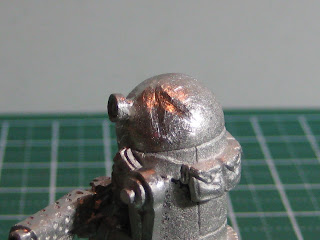 The set also included a boonie hat, designed to fit snugly over the 'Bot's camera eye. While test fitting, I found the slouch of the hat combined with the roundness of their domed heads to give a overly comical cartoon hobo appearance. Not the sort of thing that causes hardened Martian Commandos to quake in their grim, skull shaped gasmasks. Determined to rise to Spooktalker's challenge of, "I know you'll put this to good use," I thought of a picture of Carlos Hathcock wearing a boonie hat tipped back on his head. Probably protecting him from the harsh South East Asian sun while he rested after shooting yet another top NVA sniper straight down the scope into his no-good commie eye. 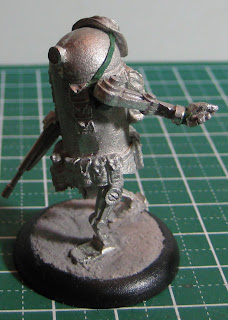 I also made a minor conversion to his left arm and hand, in order to give him a scouting "Hold, Contact" pose. An homage to several classic Perry Brothers Imperial Guard minis.
Posted by Op-For at 1:56 PM

Kickass man. Can't wait to see more. I picked up the World War Robot book finally as well so I'm fully on the level now.

Also, how the hell did you get them so clean? I soaked mine a week in simple green and after scrubbing they were still a mess. A little envious.

I left mine until the Simple Green turned clear. About two weeks. Leaving dope robot miniatures to soak for extended periods is easy when you've got other distractions. The paint just sloughed right off, only needed a little once over with soap and a toothbrush.

These models are way cool! Full of character.