The Plague Cart for my Carnival of Chaos Mordheim warband is built finally. Yay! Here are some shots of it before it got a spray of primer.If you've seen the movie The Imaginarium of Doctor Parnassus, then you will be familiar with the cart's design. Since that is my source of inspiration for the piece. 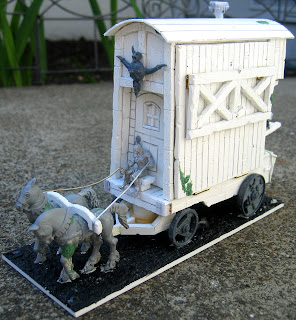 The first thing to note is that this is an extra large "cart." I am not sure of the feasibility of using it as a vehicle in the game. Many people do use rules that allow for movement and to carry guys. But due to it's size, both to get around terrain and being an extra large target, I think I may opt to use it more as scenery. It is up for debate if I can include this in my list and receive the benefits from it. Ideas are welcome. 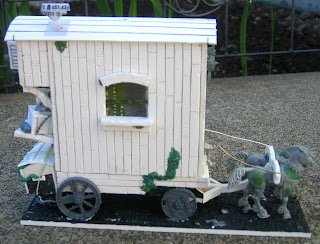 As described before, I built the cart completely out of plasticard. The wheels are from a Scaven vehicle. I have added some nurgle rot with green stuff around the cart. I wanted some, but not too much. Like the fiction for CoC says, the town's people welcome in the Carnival only to realize their true intentions too late. 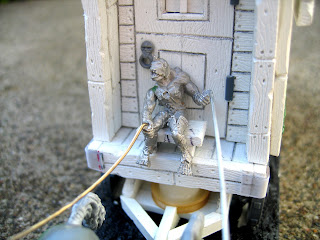 The driver is from the Dark Age range of figures. He originally held a spear and shield. Those were shaved off and his arms positioned to hold the reins for the horses. 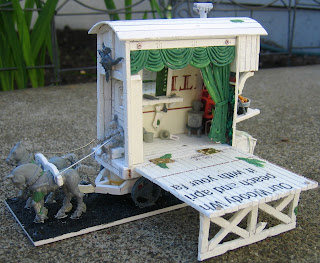 The main characteristic of my plague cart was a fold down stage. I had seen this on a few other models people had built, but not to this scale. The whole side of the cart is hinges down to form the stage floor. Magnets keep the door shut, and fold out support lowered to help support the stage. 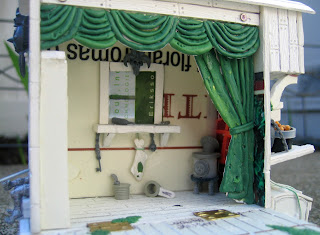 The interior features some green stuff drapes that carry the performance/circus theme inside. A stove and misc stuff are there. I dropped a fish in there being a repeating theme in Mordheim. A few models can fit inside with the door shut. 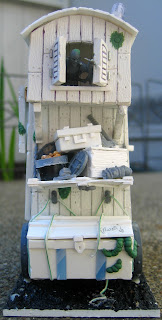 The back of the cart features lots of stuff stowed away. Plus some things trying to escape...

I hope you like. Cart has been primed along with the whole warband. So it is all ready for some paint. Cheers for now.

Posted by skywatcher at 4:10 PM

Nice, Skywatcher--you've got a kickass centerpiece there for your CoC. Love the significant details you put into it. Really great modeling.

The fold down stage is a great touch.

This is a really great build. Very impressive! Thx/Hans