Been working on getting my Infinity Combined Army stuff painted up to a tabletop standard. This is a little wierd, because they are my LEAST favorite Infinity models in my collection. The play style is super sweet though and I don't feel a ton of pressure to spend too much time on them. They are actually surprisingly cool minis having put the brush to them, I think I am just not a big fan of the studio color scheme. 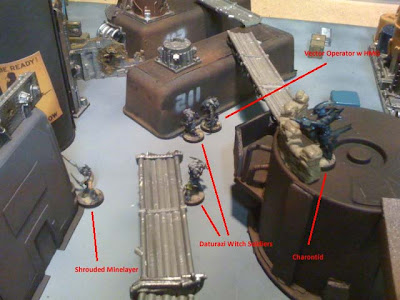 Here's the core group of my alien scum...

Charontid: Big bad scary alien AI controlled death bot. Packing either MSV3 - super thermo x-ray vision that can shoot at anything and see through almost anything or Sepositor - short wave weapon that hacks your brain and turns the enemy model into an alien pod person. Other weaponry includes the devestating Plasma Rifle (template blasts that inflict both physical and EMP damage), nanopulser - nanobot flamer, and Monofiliment CCW - you have armor, so what! This thing is sick, but expensive and can die quick if you get unlucky like anything in Infinity.

Vector Operator with Heavy Machine Gun - Annoying space tick. Has super jump and MSV2 - another visor that ignores smoke and camo, so this bug jumps all over the place spraying your face with extra-terrestial lead before dropping back down out of sight. He rocks!

Daturazi Witch Soldiers - Morat space monkey kung fu masters. Run around throwing smoke grenades, dodging, spraying you down with chain rifles, and then chop you up with Martial Arts level 4 (cue Mortal Combat theme music...). These guys are cheap for aliens and are hard to control because of the impetuous rule, but are super fun when you run them around hunting human meatbags. Synergize well with the Chartontid and Vector Op. since both of them can see through their smoke grenades.

Shrouded Minelayer - Shasvastii...I don't know exactly what these wierd aliens are supposed to be...plants, lizards...pod people I guess, but they are sneaky bastards! This guy is an camo infiltrator that drops mines all over. Nice! Miniature is actually a malignos model, but works well as a shrouded. 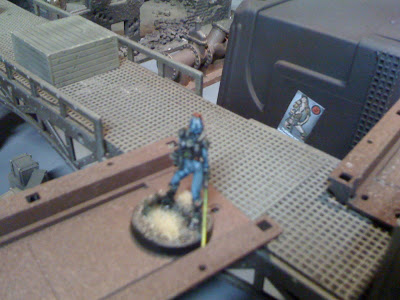 Speculo Killer - Just finished her up this week. Sorry for the blurry iPhone pic. You'll just have to see her in person. The rad thing about the SK is she's an Impersonater, than means she sneaks into your base, kills all of your dudes, and looks like a friend as she's doing it. Cool mechanics allow her to move with impunity until she either strikes, or the enemy concentrates tons of resources discovering her true identity. I was never a huge fan of the model, but it is starting to grow on me after painting her up.

Imetrons: AI beacons, just little pods that provide orders in Infinity. Scratch built these using bits and they are painted, but not cool enough to show in this blog post.

Cadmus: Another Shasvastii pod person model that drops in in a pod, hatches out, and shoots you in the face! Resembles earth worm Jim! (I think that is a good thing)

How Miniatures are Born

Here is a great video showing the process of casting miniatures from Zombiesmith Miniatures. DIY style!