I wanted to quickly recommend a wargaming blog out there called The Wolves for the Wolf God. Mostly covering 40k stuff.

Check em out at: http://wolvesforthewolfgod.blogspot.com

They are running a mini giveaway until June 15th for their 100th post. Giving a nice Forge World conversion set away! So go support em!
Posted by skywatcher at 1:11 PM 1 comment: 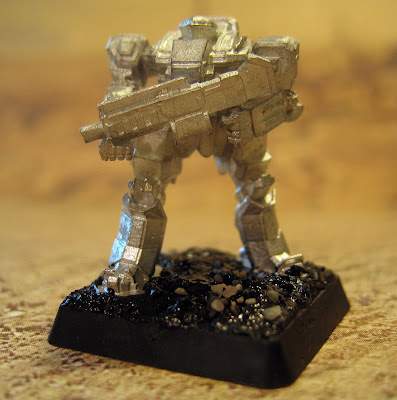 Now for a product review. Lately I've been watching and learning about 15mm Sci-Fi wargaming options. One of them the new Gruntz rules (http://www.gruntz.biz). It's nice because you just build stats to the miniatures you already have, they don't have their own model line. Also been following their new YouTube channel (http://www.youtube.com/user/trybeinganihilist)

I stumbled upon a very small 15mm mini's producer called Art Crime Production (http://www.artcrimeproductions.blogspot.com). They gave away a few packs of their models to some lucky readers on their blog an here is what they sent me.

Or in this case, it came in a simple small plastic baggy with a sticker along the top with the part number TC-001
The torso, two arms, and gun each come on their own sprue. The lower leg sections come separately. 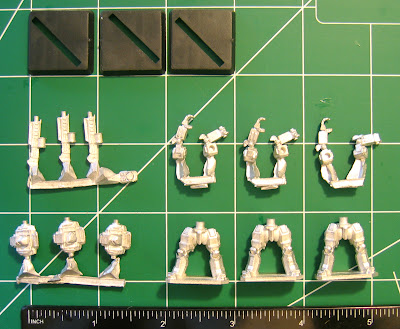 I was very impressed by the quality of the castings. Flash was almost not existent. And it had very few mold lines to file off. Each joint has a peg & socket connection, so it is very easy to assemble. Just add glue and pose as needed. Each model does have the same pose, but with the joints they can be assembled with slightly different poses. The level of detail is really nice, with some fine details coming through clearly. The model stands about 25mm or 26mm to eye level. 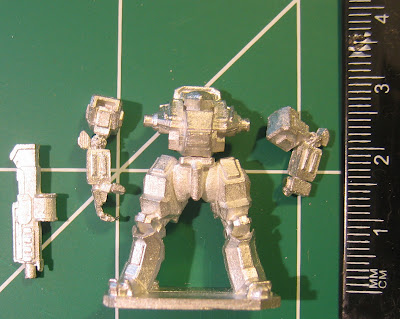 Here is a size comparison to some other models.

A great sci-fi model to use with 15mm or 6mm games. I assembled one model, adding some texture to the base with Vallejo Stone Texture Black Lava and a few small rocks. Looks nice! It looks like this 3 pack retails for $20, a bit on the high side of things. Thanks again to Art Crime Productions, and I am looking forward to more releases as they develop their line.
Posted by skywatcher at 2:55 PM No comments: