I had a spare Menoth Crusader warjack around and thought I would mod one up to make the Templar. I wanted it to visually look like the Templar but be different enough to be my own. 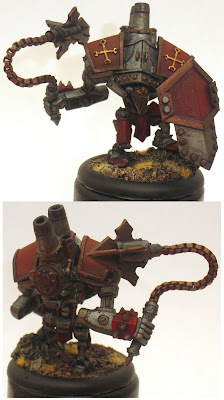 Here is a WIP photo. Shield and blazing star are made from plastic card. Chain is a unique square jewelry chain that I found that was strong looking. I took the Crusader's head and chopped the head from the "jaw", then reversed the jaw so it pointed down instead of up. Gave it a similar but different look. Had to chop it's left leg so it could stand upon the rock on the base (cork). The blazing star is positioned just above the jack's right shoulder. I have a small pin that I mounted into the shoulder that sticks straight out about half inch, which the blazing star is glued to. The angle of the star's points help obcure it from view. 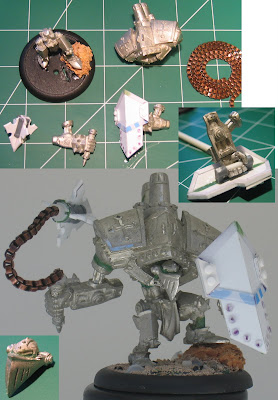 Paint scheme matches my dark theme that I am running with my force. Used plenty of washes to darken and grunge up the look. I wanted it to look warn and used. I tried some black smoke pigment on the smoke stacks to give it a burnt look.
Posted by skywatcher at 1:00 PM