Hangin with the fellas!

Hey everyone! A^2 here giving you a status update on OP4 haps! It's been along time since i was able to sit down and write a little something for the group!

Lately we've been hitting the Blood Bowel pretty hard, and with the talks from last week i think we are going to move into a bit of a league. I've been working on the rules for this, and I think that a swiss elimination would work best for everyone, with everyone starting from fresh and building up as you play. I'm actually looking at quite a few people who are interested in playing which is totally killer! Any thought or ideas to this extent?

We're also gearing up for Kubla Con!! If you are interested in coming get a hold of CR or myself, we need an accurate head count for what days you will be able to stay and what nights you are looking to sleep in the hotel in our club house! Also a good idea is to have an idea of what games you would like to play, and make sure you have the miniatures you will need for them!! Don't forget, it's coming up the last weekend in May!!

I'd also like to do club shirts before the event that we can wear so we can look somewhat organized and even more awesome, anyone else interested in doing this sooner rather than later?

lastly at some point in June I was thinking we might do a BBQ over at OP north HQ, as long as it works out for CB and Spook, so if there is a weekend that works for everyone there or one that absolutely won't give me a shout or shoot me an email!

lastly, is there any interest in running a game day over at the vets in either July or June? I've talked to Cliff and he's totally cool with use taking most of the space if we were interested. Traditionally we do fantasy/40k but I am totally open to suggestions. Thoughts? Comments? Concerns?

Well that's all I got for this addition

What do you get when you cross the old game "Car Wars", Mad Max, customized Matchbox cars and a post apocalyptic setting with a modern rule set? Aberrant Games' Warlands.

Aberrant Games is producing two gaming systems and accompanying models. Rezolution and Warlands. Both are 20-28mm scale miniature games set in the far bleak future of a post apocalyptic world. The car game system is the most interesting to me. Having fond memories of playing Car Wars in my youth, it would be great to play a modern version. There is an active community on their forum who discuss the game rules and share the mashed-up customize cars, often using Matchbox cars which are perfectly scaled and offer a huge line to work from. Check out the Painting and Terrain section for some fun. The rule set is available for purchase as a PDF at WarGame Vault for $9.99. With a full rule book being released later in the year. They are currently starting a round of beta testing. 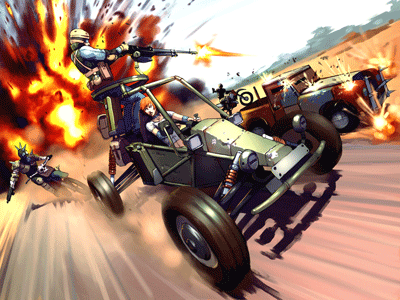 Here is their starter box set. But they also sell a weapons pack. Which can be added to painted up Matchbox cars for a more unique and custom gang.


enjoy
Posted by skywatcher at 9:40 AM 5 comments: