Ok guys this is coming a little late, but it's been busy so here we go...

Played some Hordes/Warmachine over at Op-For south.
Game 1: Mark II epic Nemo vs. epic Goreshade (the cursed not the bastard!)
I really dig Nemo's style, he has this Einstein, Tesla, Col. Sanders thing going on that is pretty cool and I like how he runs jacks, and has some extra lightning tricks up his sleeve. It helps that his epic model is pretty great as well (definately an improvement over the original model):
Here are the lists (25 points mk. II):
eNemo
Stormclad
Lancer
Stormblades + UA
Storm smithsx3
Arlen Strangeways
Eyriss 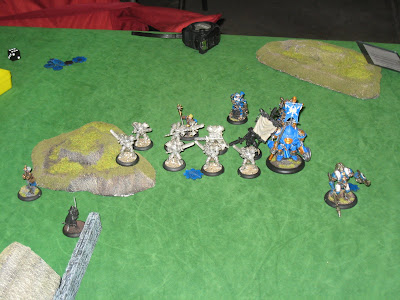 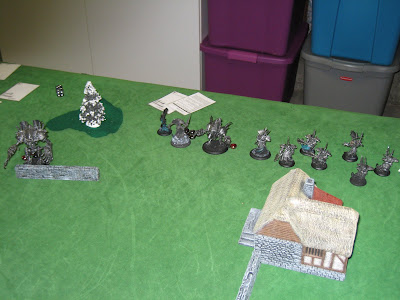 Ya looks like a good match up with some pound it out melee oriented forces. 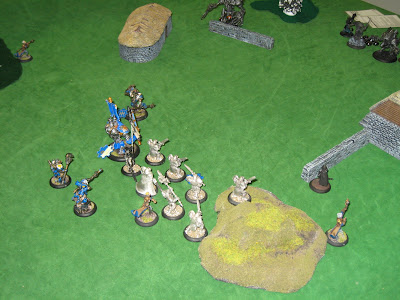 Nemo and crew head up the field going after those nasty Cryx guys hiding out in some potato farmer's homestead.
Deathjack's hidiing behind a wall ready to pounce.
The Stormsmith and stormblades are pretty dope in Mark II. The point values make a lot of sense now and they hit hard like the elite of Cygnar should.
25 point games are also really cool in Mark II. The new edition is faster anyway and the streamlining allows a game of this size to be played in about 1 hour, while still allowing you to take a little bit of a varied force.
There's some maneuvering around and Nemo sets up a charge on the Cryxians. Nemo is able to scoot his jacks forward with Energizer allowing the Stormclad to charge Deathjack, scrap it, and kill the Skarloc with electro leaps. The Lancer engages Tartarus, and the Stormblades assault the Seether damaging it with lightning blasts. 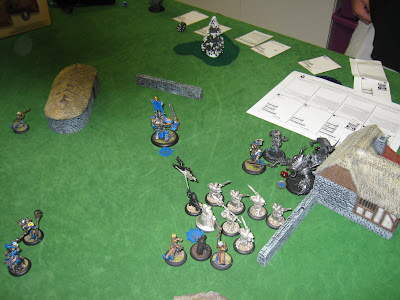 Here's the set up before the last turn. Stormclad gets a charge off on Tartarus, kills him, get's Goreshade down to 2 points with the reach on his Generator Blade and a storm smith zzaps him for the last two.
Anthony and I then played another quick Mark I game, Leo and Trevor played a big grinding attrition game, and we did some Star Wars Epic Duels:
More pics here (maybe other guys want to do reports, knock yourself out, blogger is testing my patience).
http://s240.photobucket.com/albums/ff135/cbarney_photo/GameNight0916/
Pics of Trevor and Anthony's big Mk. 2 Cryx vs. Menoth battle:
http://s240.photobucket.com/albums/ff135/cbarney_photo/cryxvsmenoth/ 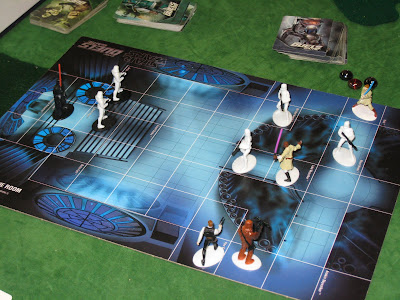