So I was stumbling through the Privateer Press forums and ran into this that was posted. 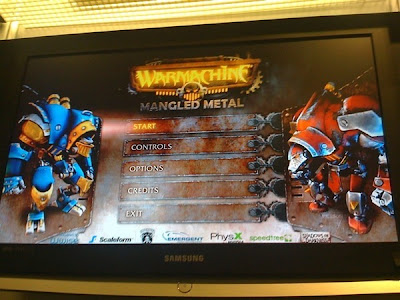 In depth analysis flowed through the forum community as the buzz and excitement levels raised. They reviewed all known elements and speculated about the rest. Fighting game, Real Time Strategy, MMO? What was it? It had all the marks of being real. All the logos, matched those companies involved with other game products. They even found the Warmachine info on some of these websites.. Here at ScaleForm and on this PDF online. 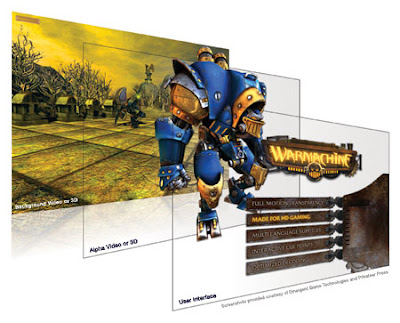 What was it....?
Then we got the post that everyone dreaded from Kevin a PP admin...

"The screenshot taken at GDC is of a technical demo created by Emergent to showcase their latest middleware product release and features the WARMACHINE intellectual property. While this is not an *actual* game, it is about five minutes of fun demonstrating what warjacks might look like in a video game environment. We have a fantastic article coming in next month's No Quarter that will tell you all about Emergent's efforts and how they brought a little piece of WARMACHINE to life on the computer."

O well, maybe next time.
Posted by skywatcher at 9:04 AM 3 comments:

Lady Luck shines on the Maulers! 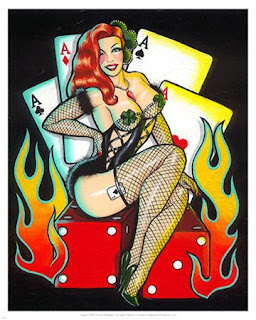 After a some stiff competition and a one week rain-delay, Malal's Maulers beat the Wasteland Blackhorns 1 to 0. There must have still been a few puddles out on the pitch, because the Blackhorns proved you can keep your eyes on the prize, but only if you look where you're going. The quickest way to the end zone is not on a stretcher. The League Commissioner has the Maulers under investigation, due to rumors of the Maulers' Cheerleaders being seen exiting the Blackhorns locker room with tubes of grease and a cleat wrench. Cheeky Daemonettes! An anonymous Blackhorns staffer thinks this explains why so many players ended up in the infirmary.
Stick around, after the break we'll have the latest in Grind news. Only on the Op-For Sports Network!
Posted by Op-For at 8:43 PM 2 comments:

Vote in the New Poll: Going to Kublacon 2009 in Style with a Fancy Group Pass

Op-For owns every year at Kublacon, but this year, what do you say we own a little more?

I say we get ourselves a group pass: http://www.kublacon.com/Groupreg.html

Passes are just $30 each ($20 off door price, $10 off prereg price). We just need 10 people in. I will coordinate. Just vote in the poll and send me an email if you're in. I think it will have our club name in on our badges, too, so it's worth it just for that. Increase visibility.

I will let the Doomed Legion know, and you all could spread the word as well.

The deadline for the pass is 4/15, and I'd like to have everything sorted by early April, so let me know as ASAP.
Posted by Spooktalker at 12:15 AM 5 comments:

This is the first year in this expansion team's history. Players were hand selected by head Coach Saw-Tooth from various villages throughout the Wastelands. Raised in extreme environments and punished through years of rival village warfare, these beast's of the desert are a force to behold. A number of Beastmen make up the majority of the lineup, followed by a pair of well-trained Chaos Warriors. Days before the first pre-season match, they secured their last player to the starting lineup, a Minotar. This beast of a creature stands three heads above all the rest of the field. While this monster already killed two of the team's trainers, Saw-Tooth says "We are confident that he will be an asset to the team."

In the team's first match, and a pre-season game, we defeated a strong Norse team. Although more agile, our strength and brutality clearly made up for this, letting one of our Beastmen run in a score during the first half. Coach Saw-Tooth wants to formally announce the arrival of this team to the grid iron, and to state their intentions of "going all the way" as he put it. Good luck to all.
Posted by skywatcher at 4:48 PM 2 comments:

Bloodbowl is Here! This week we will be introducing some new teammates and going over the rules, picking teams and building rosters, then if we have time a practice game. Next week we will start the League. 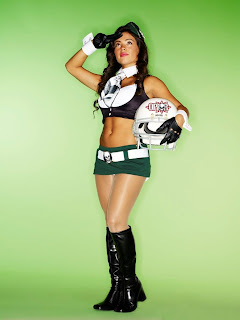