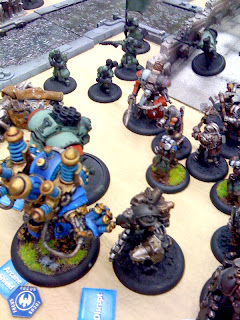 A strong and nimble Cygnar force unsheathed sharp bayonets against a combined assault by Khador and Mercenary armies. The battleground itself proved a challenge with both narrow passageways and tight bridges to cross. The powerful armies converged on each other at a narrow bridge centered on the battlefield. Unconfirmed reports from a mortally wounded Devil Dog, claim that Magnus fell to Caine and his calvary and trencher fire. 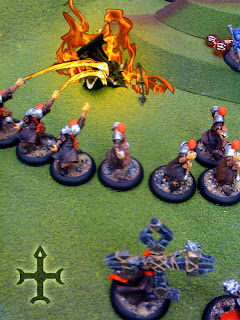 High Exemplar Kreoss encountered a Circle Orboros force on route through a small wooded area. The sneak attack began as Krueger's formidable army emerged out from hiding in the nearby forests and hills. The powerful wolves took their toll on the Protectorate forces, but in turn powered their own demise. Kreoss summoned the almighty power of Menoth and knocked Krueger's forces to their hairy knees. Then the Holy Zealots followed up with a napalm assault. At that point, Krueger's soul was destined to be claimed for Menoth.
Posted by skywatcher at 11:30 AM

Ya, many games could be ended with:

He's an assassin, a gnarly one, but that's mostly it. In 1000 points being able to have 2 casters with Haley slowing everyone down, it's pretty wicked!

As a circle player, I want to feel bad for Krueger frying under all that napalm. So why does it warm my heart seeing that pic? Well done.

Glad CR has cowed to peer pressure! I heard about the mercs force and look foward to squaring off against it.

And btw, fine looking figures all around. Really.

Finally, hope to partake in Warmachine month but don't leave out Hordes naming shit like that, dudes, you will hurt it's feelings.

But not only are my converted druids 100% ready for priming, but so is my proxy Ilyad warp wolf, the reason I started circle in the first place. A new can of Dupli-Color and I will be 500 points go.

I don't want to see a Special Effects shot of Magnus meeting his demise... well maybe a little.