The new poll for January is up. Vote early and often. It will only let me have it open for a week (limits of blogger again).

An Imperial transmission was intercepted yesterday. We've learned that Darth Santa dark lord of the Gift has used his funds to purchase a prize for the weekly gamers. He wants us to figure out a way to determine a winner over the next few weeks, then award him the prize. It is unknown what exactly the prize is, but Darth Santa stated "I like her fashion sense." 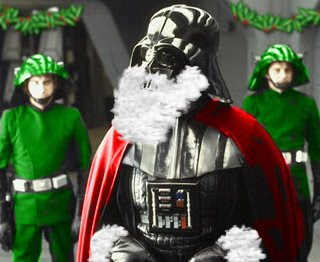 "You are part of the Rebel Alliance and on the Naughty List. Take her away!"
Posted by Op-For at 11:58 AM