Memorial Day Weekend means a lot to many people. But to many gamers (around 1,000) in the North Bay it means 4 days of non-stop gaming at KublaCon! This year marked my 3rd KublaCon and it was my best one yet. Went with great friends, meet up with familiar faces, tried new games, and scored at the flea market.

Two things are important on Friday. The first is getting your name on the lists of miniature games that will be run that weekend. It's pretty old school still, hope you get there soon enough to write your on the sheet. Secondly, is getting to the flea market early. This one we nailed. SECOND IN LINE!! 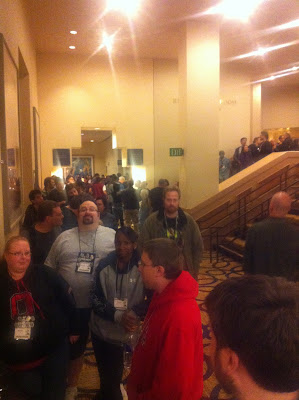 The Flea Market line: This doesn't show that the line wrapped itself left around the corner, down the hall, then back up around, up the stairs and down that hall. And we were second in line. Once inside it was a mad dash to anything interesting. Mario scored Spooktalker a seriously cool bag of old lead minis.

My gaming started with Star Wars Pod Racing. (Thanks to the first 4 people on the signup list who didn't show up) GM made up some fun pod racers and had nice looking table and 10 eager players. I was the small brown colored racer, 3rd row back in the center. I say "was" because I was blasted out of the game before we even arrived at the first corner. Those are my smoldering remains in the picture below. yay. I left the game for around 45 minutes and came back to see that the players still hadn't made it out of corner one yet. Great concept of a game, but far too slow. 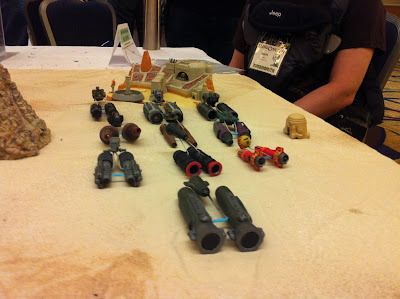 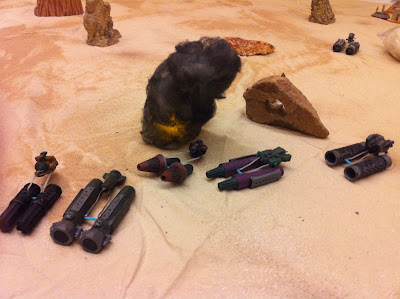 Next up, was running my Axles & Alloys game. This would be my second year, and plenty of folks signed up. To my surprise Kevin, George and Steve names were on my list, and they all were returning players from last year. Matter of fact, Steve & George had brought their own cars they kit bashed up. So cool. Also joining us was Anthony, Spooktalker, OpFor, Mario, plus Theo and Reid. It was great to see the support. 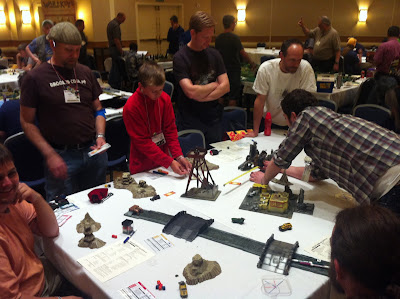 Game one, we had a classic deathmatch scenario. Good old death and destruction ensued.

Game two: Escort the semi mission. I gave the attacking team an additional car and I secretly gave the semi an extra car in it's trailer (which it never deployed). The two teams charged forward into each other, taking turns destroying one other. The funniest chain of events happened at the end, when the semi was on a collision course with some terrain and in a last ditch attempt to evade it, played a Chance card. The card let the vehicle leap into the air, but unfortunately didn't get enough clearance over the terrain. Causing him to crash into the terrain. Giving the last remaining opponent a chance to t-bone him. In doing so, destroying himself and the semi. A dramatic and hilarious end to the game. Victory went to the attacking team. 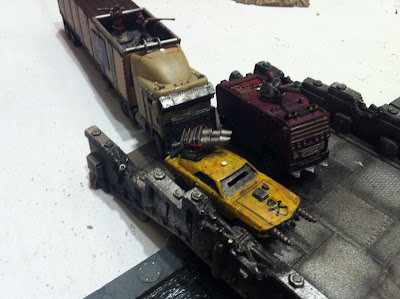 Mario and I played a round of Dreadball afterwards. Dwarves vs Rats. It ended up being quite a close game. Mario's last rush gave him the lead, and I followed up on my last rush, countering with a 4 point score to steal the win away. Quite a fun game.

Also got the chance to play a beta version of a card game by Steve. Check his blog here http://www.stevebeangames.com. Probably won't say too much since they are still developing it. But it did win an award at the game design competition that weekend. And I know our gaming group was impressed by the game's mechanics and how well they were tied to the theme. Great job guys.

Got in a game of Desperados, Dudes & Deputies by Steve and George. 54mm weird wild west zombie shootout game. I shot it out at the local saloon. My partner was pushing up daisies, but I managed to enact revenge. They ran a second game with zombie hordes, but unfortunately, I had to leave before then. 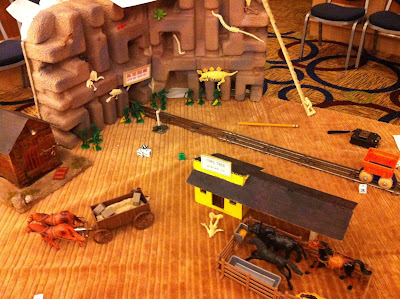 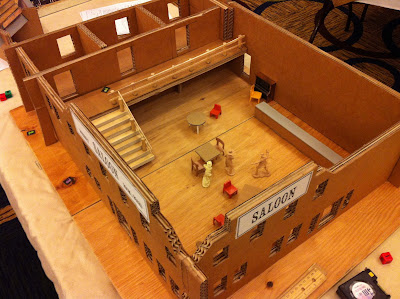 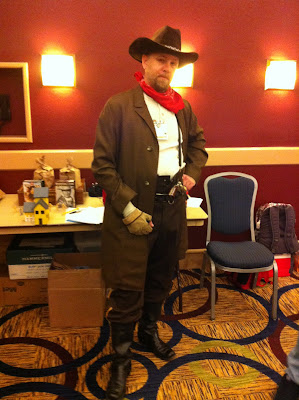 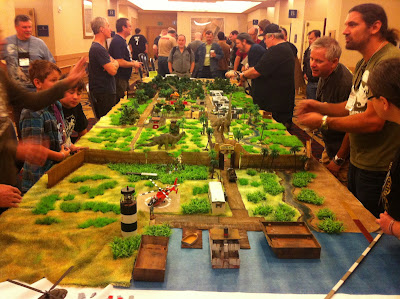 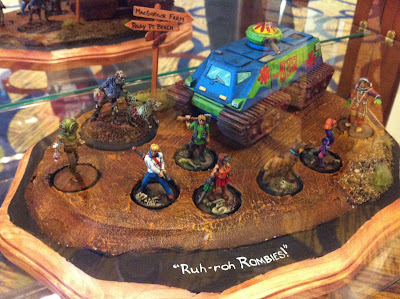 This won the gamer's choice award in the painting contest. 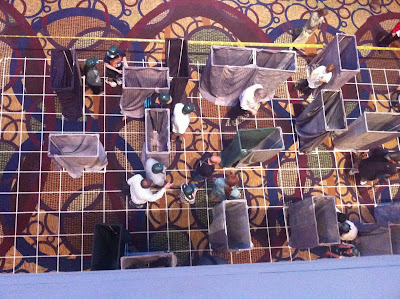 Aliens vs Marines game with lots of kids. I was told it might play as a SpaceHulk game. 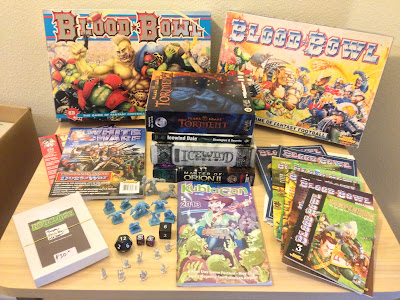 My score from the flea market and vendor hall. BloodBowl to the max, including 4 plastic teams, one metal team, standard and foam pitches, plus misc BB mags. And PC game Planescape Torment that I have been hunting for. Thank you Damon for the Rezolution figs! Found some Hero Quest figs too. Dice. And some cute bunny minis from ZombieSmith.


Overall, I had a great time. Not sure if I will run Axles & Alloys again. But if I do, I will need to think of something special to take it to the next level.